By default, FixMyStreet uses email to send problem reports to the body responsible for fixing them. But it's best if sending reports is integrated directly, so that problems are injected directly into the body's back-end system.

Integrate if you can!

Often bodies, especially if they are local government bodies, already have databases and back-end systems for tracking problems they are fixing. FixMyStreet works fine if you just use the default send method, which is email, but it’s much better if you can integrate with the body’s back-end systems.

How hard this is depends on the kind of system the body is using, and how much cooperation they offer FixMyStreet. In general, once FixMyStreet is integrated it’s easier for the body’s staff to use.

Our experience with FixMyStreet in the UK is that councils that integrate with FixMyStreet also choose to run it as a cobrand (that is, branded and on their own website). In fact, cobranding and integrating are not dependent on each other, so if you do one it is not necessary to do the other.

Levels of integration (and their benefits)

Although you can approach each of these levels of integration as custom programming tasks, we strongly recommend you use the Open311 open standard when you can.

Strictly speaking it’s possible to implement any of these levels independently of the others. In practice, though, each one tends to follow on from the previous one.

You don’t need to integrate everything

You can integrate with just one body (while the others continue to use email). You can even just integrate certain categories for a body — for example, “Potholes” and “Fallen trees” could be submitted by Open311, while “Streetlighting” problems are sent by email.

No integration: send reports by email

With no integration, problem reports are sent by email: 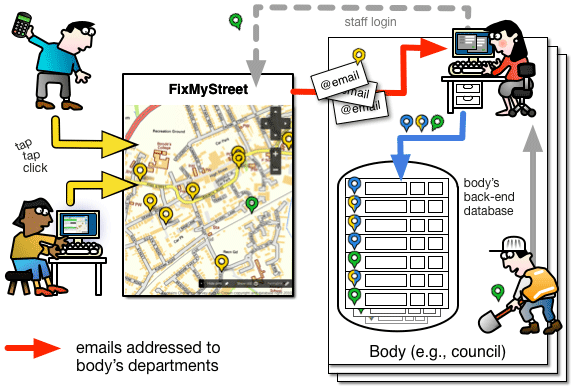 Stage 1: Injecting directly into the back-end

With the first level of integration, problem reports are injected directly into back-end: 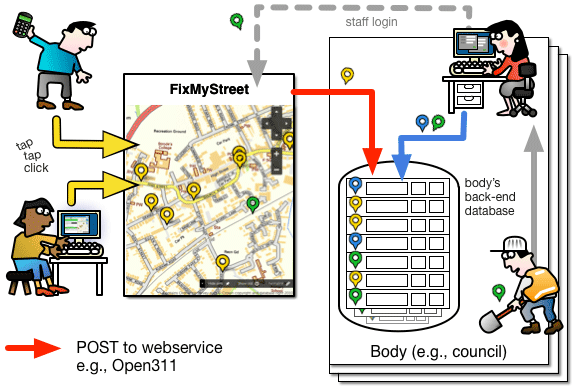 If the body’s server is already Open311 compliant, you can switch on the first stage of integration – which puts the problem report directly into the body’s back-end system instead of emailing it – just by setting the send method (for the body, or for specific categories) to Open311.

To enable Open311 for a body, edit in in the admin and set send method to “Open311”. A form will appear for Open311 connection details including, for example, the body’s endpoint URL. It’s common for Open311 endpoints to require an API key and possibly access criteria before they will accept Open311 service requests. You’ll probably need to talk to the body’s IT team to be granted access – for example, they may only open a port to your server’s single IP address.

In our experience, bodies integrated in this way often want to know the FixMyStreet ID for the report, to store at their end. From the body’s point of view, FixMyStreet is the external system, so we usually pass this to them in the Open311 POST request as attribute[fixmystreet_id]. If the body sets up their Open311 server to request this attribute, we will automatically fill it. If they want the field named differently, you will need to store it as the id_field extra metadata on the relevant contacts.

What if the back-end system is not Open311 compliant?

If the body you want to integrate with does not yet support the Open311 standard, you can still integrate with it, but it takes a little more work. If the back-end offers an alternative way to post new problem reports into it, then you’ll need to code it. Typically this could involve either adding a custom Perl module to perlib/FixMyStreet/SendReport, or writing a ‘proxy’ server that receives Open311 data from FixMyStreet (so it is Open311 from FixMyStreet’s point of view) and then sends on differently formatted data elsewhere.

We strongly recommend you try to implement the Open311 standard instead, but you might well not be able to change the back-end system (often these are large, proprietary and inflexible systems), so you may be able to implement a shim that makes it behave like one. For example, in the UK we integrate with a number of councils whose back-end does not use the Open311 standard, by running a script either on our or their server, which accepts incoming Open311 requests and converts them into custom calls. The script captures the result and sends it back as the appropriate Open311 response. We have an example of one adapter we use on GitHub.

The advantage of this approach is that, to FixMyStreet, the body uses the tried and tested Open311 send method. The benefit to the body is that should their back-end one day implement the Open311 standard, or they change to using one that does, then no changes will be necessary other than to remove the scripts.

With the second level of integration, not only are reports injected directly into the back-end, but back-end status changes automatically propogate back to FixMyStreet: 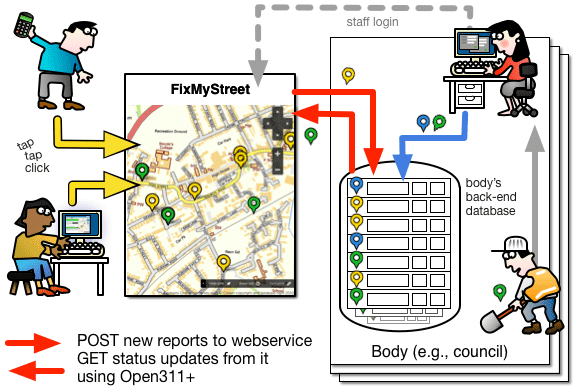 When the body fixes a problem, they mark it as fixed in their back-end system. Stage 2 integration detects this change and automatically updates the record on FixMyStreet. Typically this means marking the problem as fixed (turning the pin green, if configured to do so) and optionally adding a description from the council.

A basic form of this is in the Open311 standard, but we prefer a slight extension (which we think should be: see this explanation) and it requires the back-end to expose update data.

Our experience is that most back-ends do not already provide this data, but that it is a relatively easy for them to implement if they choose to do so. For example, on a typical problem database, one method is to add a trigger that detects whenever the status of a problem changes (for example, is marked as fixed), and record the time and status change in a new table. FixMyStreet polls the back-end for updates within certain time bounds (“have any problems’ statuses changed in the last 15 minutes?”), which effectively reads from this new table.

FixMyStreet adds these changes automatically as updates on the public site: for example, marking a problem as fixed with either a custom comment send from the back-end or else a boilerplate one (for example, “Fixed by Borsetshire Council road crew”).

In order to set this up you first need to liaise with the body to make the update data available. You can then enable it by editing the body in the admin, and enabling Open311 update-sending. You also need to nominate a FixMyStreet user to which all these updates will be credited (for example, “Borsetshire Council”) – if necessary you can create a user just for this purpose at /admin/users.

The mechanism we use for propogating fixes (and other status changes) from the back-end to the FixMyStreet site is deliberately light on the body. That is, once the body has implemented the update table (or its equivalent), FixMyStreet is responsible for polling the back-end – there’s no requirement for the body’s system to do anything other than respond to these requests. Furthermore, when it does so, it uses the back-end’s own reference (stored in FixMyStreet’s database as the external_id) to identify problem reports, so there is no requirement to use the FixMyStreet ID. Because FixMyStreet polls regularly (typically every 15 minutes thoughout the day, with a single 24-hour mop-up once during the night), any problems connecting or tracking which updates have been picked up are handled at the FixMyStreet end.

With the third level of integration, problems reported by staff on the back-end are shown on FixMyStreet too: 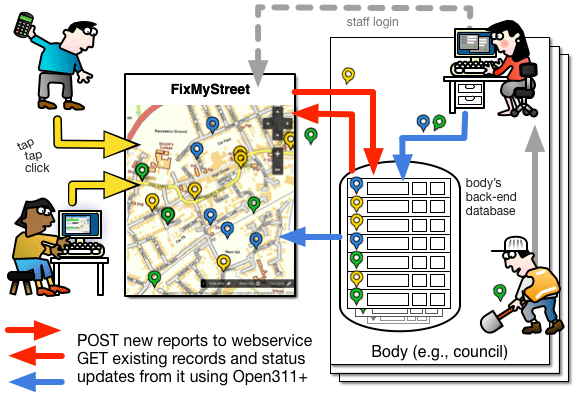 The third level of integration is for all problem reports on the back-end to be displayed on the FixMyStreet system. Before doing this, you need to consider:

Talk to us before doing this level of integration. Our experience is that levels 1 and 2 are higher priority both for public users and for the authorities, so it’s a good idea to implement those first.