FixMyStreet’s report pages for a particular body have always highlighted the area of the body covered, by fetching the KML shape from the associated MapIt and plotting it on a map. In version two we have made it look much nicer: 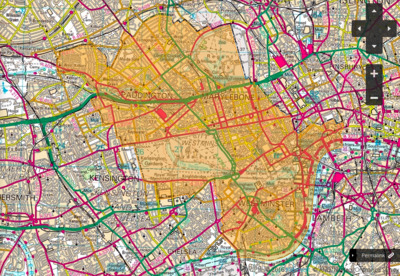 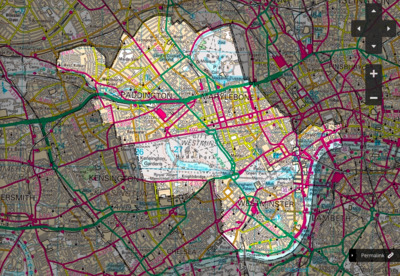 Until now we have coloured in the shape in a light orange, as pictured above left. This is fine for an overall view of a body, but if you want to zoom in to a particular area, it makes it quite hard to see the underlying map.

It would be preferable if every part of the map except the body’s area could be shaded, highlighting the correct area without losing any clarity from the part you’re interested in, as in the new image above right.

Polygons in KML and other similar formats are made up of multiple linear rings – the first ring is the polygon’s outline, and any subsequent entries are holes within the polygon. You can therefore ‘invert’ a polygon by having the outer ring be something surrounding the polygon, then having the polygon be a hole within that.

So the way we have implemented this in our new version is to fetch the area from MapIt, but before plotting it preface it with a giant rectangle covering the whole world. (Thankfully, any holes within the original shape are inverted too, though that is implementation dependent and it would have been a lot harder if they weren’t!).

There were a couple of issues along the way. MapIt may return either a polygon or multiple polygons, so we needed to deal with each differently (we turn multiple polygons into one polygon, which also thankfully Just Works). And OpenLayers has a hardcoded maximum pixel co-ordinate for SVG rendering, dating from 2007 and an issue in Firefox 2. We hope that any such issues have been fixed by now. We haven’t had any reports of crashes yet, anyway…