We're sometimes asked about running FixMyStreet with SMS. With SMS, users can report problems by text message instead of using the web interface. This page describes how it can work, and what you must consider before going ahead.

Adding SMS capability to your FixMyStreet site is, on the face of it, a great idea. In theory, it allows people with non-internet enabled handsets, or with no data network coverage, to report problems. Such people may represent a large and important section of the local population who might otherwise be unable to use the service. However, it’s important to appreciate what the limitations of SMS are, and why we always recommend you establish and run your site on the web before you try to add SMS capability to it.

One important aspect to FixMyStreet is that most problem reports are about problems with specific locations. On the web, this means we can present the user with a map to click on.

This interface, encouraging people to click on a map, serves a couple of functions:

The main problem with SMS — although there are others — is that both of these benefits are lost. So although SMS may be beneficial because it doesn’t require a more powerful device or interface capability, these are two significant drawbacks. Both of them require your team to process the incoming reports – either to detect and intecept duplicate reports, or to identify the precise location of a problem where this is not clear.

In effect, this means that adding SMS capability to FixMyStreet increases the burden on the support team running the site. Or, if it doesn't, then this burden is passed directly on to the authorities who are receiving the reports — and you should not run your site in this way.

This is not to say it should not be done, just that if you do it you must appreciate that you will not be making your team’s lives easier. Of course, you might be making things easier for the citizen users, but this will only happen if your team is able to handle the work it may generate. It might not be a lot of work – that depends on how the system is used, and how widely – but it will certainly not be less work.

We have also encountered misunderstanding about using geolocation on mobile devices. The technical issue here is secondary — the main point is that FixMyStreet doesn’t need the location of the handset; it needs the location of the problem being reported. This distinction is handled by the web interface, but not when using SMS. See Geolocating via SMS below for more details.

So, we have two approaches to this, and we always recommend anyone looking to add SMS reporting capability to FixMyStreet tries the first one (method 1, below) first.

In both cases, you start by advertising a number (possibly a shortcode which is easier for people to remember) for people to send SMS reports to. This means you should customise your templates, because (when it’s running live) the number should presumably appear on the website too.

Have all incoming message go to a mobile phone your team has access to. They then create problem reports in the FixMyStreet using their staff login, on behalf of the reporter.

The main reason for doing this is you get to discover just how badly needed SMS input is. If nobody sends reports to you, you’ve discovered that it’s not in demand, and you haven’t invested any time in integrating SMS into the system. And if they do, you get a good idea of the kind and quality of the reports you will be receiving.

The downside of this is that the reports you create are not in the name (or account) of the sender – this may be more of a problem than you might realise, because it means that the body (the council) who eventually gets the report cannot reply directly (unless you also pass on the phone number – note that you typically won’t know the name of the citizen either, as you’ve probably only got their number).

It’s likely that you will need to reply to some incoming SMSs to clarify the nature of the report (especially to pinpoint the location if it’s not clear), which you can do from the mobile phone. Of course there is an implicit cost to this because you’re sending an outgoing messages from the mobile phone each time.

Method 2: use an SMS gateway

Use "Message Manager" integrated with an SMS gateway. Your staff can access the messages using their staff login, and create problem reports on behalf of the reporter.

We have a web application called Message Manager that accepts incoming messages from an SMS gateway, and makes them available to staff users within the FixMyStreet website. A staff user on a FixMyStreet site that is using Message Manager can see incoming SMS reports, reply to them, and turn them into reports by clicking on the map. This effectively integrates SMS messages to FixMyStreet but it’s very important to understand this does not automate the creation of reports. We do not do that, because of the subtleties described above: the location of the problem is often vague, and the submission may be a duplicate report anyway.

The advantage of using Message Manager is that the reports are easier for trained staff to manage, because it’s all happening in the web browser. Reports submitted in this way are marked as such (“via mobile”) on the site. It also tracks the conversation threads for any replies. Commonly, your staff may need to clarify details with the original reporter before the report can be accurately made. Message Manager allows those replies to be sent from within the browser too, and maintains them as threads. It also supports a certain amount of processing based on codes within the message, for example, incoming messages can be automatically classified by looking for prefix codes (e.g., “to report problems in the Foo district, text ‘FOO pothole outside Example Shop in Demo Street”).

So, Message Manager makes sense if you’re getting a lot of SMS messages and your team is willing to handle them.

But there are two big caveats: firstly, it is not straightforward to set up, because it needs to be integrated with an SMS gateway that is using the advertised number or short code. This integration almost certainly requires custom coding depending on the characteristics of whichever SMS gateway you use (for example, this is the code we wrote so that Message Manager could run with the NetCast SMS gateway in the Philippines). Also, of course there is a cost involved in using an SMS gateway, typically both for its setup (for receiving messages), its ongoing service, and possibly charges for outgoing messages.

And remember, accepting SMS messages through an SMS gateway with Message Manager does not lessen the burden of work on your team, it adds to it. It just makes that work a little easier because it’s possible to handle everything entirely in a web browser, and there’s a little less typing to do. 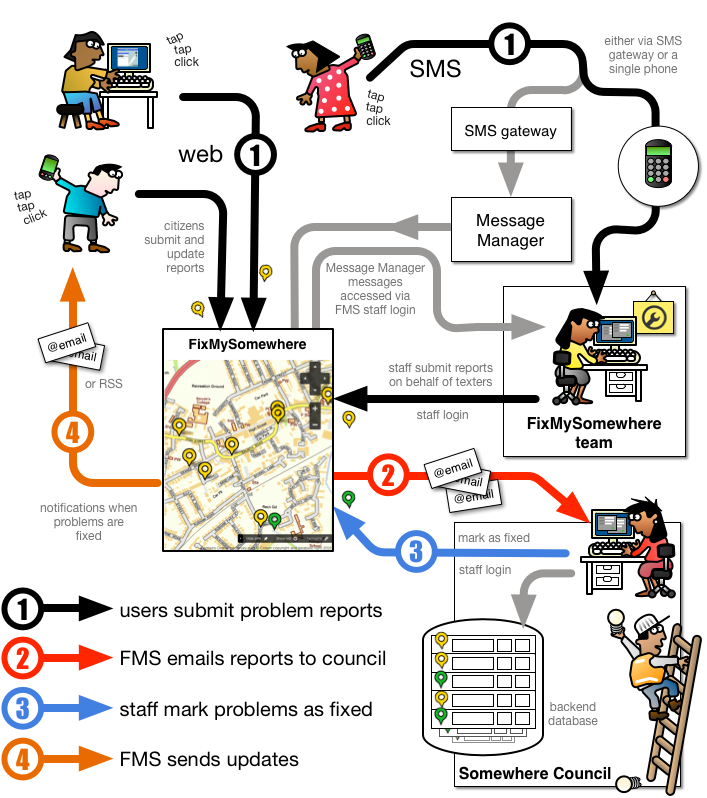 Finally, a note about geo-location via SMS: some people get enthusiastic about being able to automatically detect the location an SMS was sent from. It’s important to remember, in the context of FixMyStreet, that even if you can determine the location from which an SMS was sent (technically, SMS itself does not provide such a capability, but some network providers may offer a service which does a similar thing) this isn’t automatically useful.

The problem is this: very often a report to FixMyStreet is not being made from the location of the problem. That means you don’t care where the phone is; you care where the problem (e.g., the pothole) is. This works fine with the web interface where the user can (if they want, and if the device supports it) use their current location which the device can automagically supply. But there’s no such interface with SMS, and even if there was a reliable way to identify the location of the sender, we would warn agains sending reports on to the body responsible for fixing them when there’s no way of knowing if the geolocation data is or is not the correct location. FixMyStreet would fail as a service if the authorities it is reporting to cannot trust the location information it is sending to be useful.